“Physics of Light” by Vicente Avella

Light is a fascinating subject all by itself. Light shines and then reflects back to our eyes. This is called “visible light,” which is all the colors our eyes can see. But my understanding of the physics of light is there are even other types of light that we can’t see, such as radio waves and sound waves as well. And did you know that bees are able to see ultraviolet light? As I said, light is a fascinating subject.

Equally as interesting is the classic, symbiotic interplay between light and dark. . .one cannot exist without the other. The 16 piano tracks on Vicente’s new album, “Physics of Light,” which explore the properties of light in all their splendor, are reflective of this interplay and, as well, of his own experiences in life as seen through the eyes of the “physics of light.”

A little about Vicente Avella: He is an award-winning recording artist hailing from Caracas, Venezuela. He’s an instructor at Berklee College of Music’s Online Extension and he is also an adjunct faculty at Antelope Valley College. He earned his bachelor’s degree in piano performance from Indiana University and his master’s degree in music composition at the Eastman School of Music.

The album opens with the very pretty piano piece, “Light Particles.” Not a terribly complex composition, it is beautiful, flowing, and melodic, and a wonderful opening for all that comes next.

“Radiance,” which follows, is faster paced and truly scintillating. The song was released as a single from this album and received a Bronze Medal award at the Global Music Awards, as well as being nominated for an award from the InterContinental Music Awards.

“Where Light and Shadow Meet” is very well done with great use of both upper and lower registers which perfectly serves to illustrate the eternal interchange between the two.

Some favorites: “Ultraviolet,” another award-winning and award-nominated single from the album, is just gorgeous. We could, perhaps, say the wavelength of ultraviolet light is “glowing.” So is this composition. Quite enchanting all the way around.

Slow and emotionally stirring, “Color Spectrum” is melodic and captivating. At 2:28, I only wish it were a bit longer.

My understanding of claro light is that it is a type of LED light that has the power to heal in some regards. The piece here, “Claro,” is quite calming to the psyche and lovely. One can feel the healing seeping into their soul.

If I have it right, the observer of a penumbra is experiencing a partial eclipse, as the “umbras” (umbra, penumbra, and antumbra), refer to parts of a shadow. In his composition, “Penumbra,” Vincente uses both upper and lower piano registers in a focused and balanced manner.

“Reflection” is another truly gorgeous piece that I found very enjoyable all through. This is memorable and poignant, inviting us to simply reflect, perhaps as light does. Love this. Truly captivating, “Intermezzo” is equally as lovely in all regards.

The movement in “Infrared” is wonderful. And again, the use of upper and lower piano registers gives us that contrast and balance between light and dark. This is an outstanding piece.

The album closes out with the slower paced, melodic, “Visible Light.” This ties things all together – brings all our “colors” into view – is soothing to the soul and brings us back into our earthly “reality.” What do you see?

A wonderful and hauntingly beautiful album, you’ll most likely want to get the whole album for the full “light” experience. 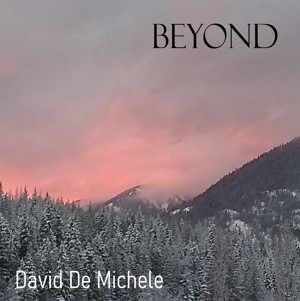